What’s the economic impact of the bushfires? 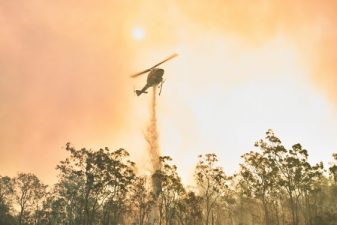 It’s been the worst bushfire season in living memory, with 18.6 million hectares destroyed by fire since June 2019. On top of this, a billion animals have been killed and 5,900 buildings have been lost including more than 2,500 homes. Very sadly, 34 people have also died.

It’s nothing short of a catastrophe. This awful event will also have long-term ramifications for the Australian economy. According to research by investment bank UBS, the bushfires could reduce Australia’s GDP by 0.25 per cent.

Agriculture, retail, tourism and construction are the sectors most likely to be the worst affected by this disaster. As a result, shares that have an exposure to retail, insurance, food and beverage and transport may see their values fall. UBS estimates resources, building materials and infrastructure will also be affected, but only mildly.

AMP Capital economist Shane Oliver says although the bushfires themselves are only likely to have a minimal impact on GDP growth, they will have a negative effect on consumer confidence and consumer spending. He also notes the hit to agricultural production as a result of the drought will also reduce economic activity this year.

Oliver stated in a note to clients, “a bigger impact on economic activity is likely to come via a hit to consumer spending as the constant news of the fires and the smoke haze in several capital cities weighs on confidence.”

Oliver thinks the Reserve Bank of Australia (RBA) will cut the cash rate to 0.5% in February, which should counter some of the negative influences on economic activity at the moment.

Good does tend to come out of bad, however. He notes, “there will be a very big rebuilding boost to economic activity to come once the fires are brought under control.”

To combat the effect of the bushfires on the economy, the federal government announced a $2 billion relief package that will be spent over three years, with $500 million of those funds to go towards the rebuilding efforts this year.

UBS does not expect the $5 billion budget surplus will be impacted by the fires. But expect the federal government to focus on the bushfire rebuilding efforts when it hands down its budget in May.

The information contained herein is of a general nature only and is not intended to be relied upon nor is it a substitute for appropriate professional advice. Whilst all care has been taken in the preparation of the material, it is not guaranteed to be accurate. Individual circumstances are different and as such require specific examination. Asparq cannot accept liability for any loss or damage of any kind arising out of the use of or reliance upon all or any part of this material. Additional information may be made available upon request.